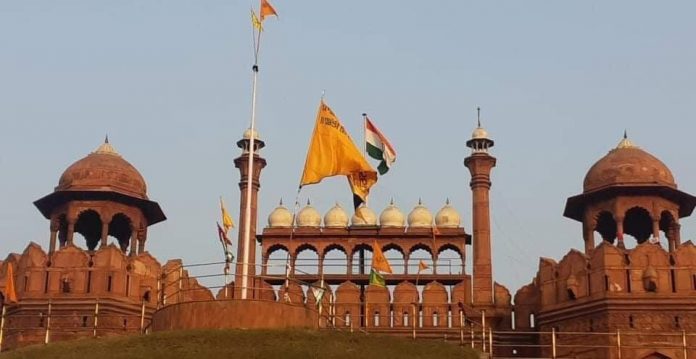 How the standard of the Sikh tradition represents opposition to oppression

WRITTEN BY: Pieter Friedrich is a freelance journalist and analyst of South Asian affairs. Learn more about him at www.PieterFriedrich.com.

On India’s 71st Republic Day — which commemorates the adoption of the country’s constitution — Indian farmers, with Sikhs from the state of Punjab leading the charge, entered New Delhi as they continued their months-long protest against controversial new agricultural laws passed by the government of Prime Minister Narendra Modi.
A culmination of the protest came when some of the protesting farmers arrived at Lal Qila (the “Red Fort”) which was built by the Mughal Empire in the 17th century. The fort has, since India’s independence in 1947, come to symbolize the Indian Republic. After they entered the premises, some moved to raise the Nishan Sahib — the flag of the Khalsa (sovereign), an institution consisting of the community of Sikhs — over Lal Qila.

What does the hoisting of Nishan Sahib over Lal Qila represent? According to the first Sikh Guru, Nanak:

“The lowliest of the lowly, the lowest of the low born,
Nanak seeks their company. The friendship of great is in vain.
For, where the weak are cared for, there Thy Mercy rains.”

With the advent of the tenth Guru, Gobind Singh, and his establishment of the Khalsa, the original intent of Guru Nanak was finally fulfilled. The downtrodden embraced a Panth — path — in which they will never be victims, always be victorious, and constantly fight for the oppressed.

Guru Gobind Singh did this by uniting Panth and Granth — text — in a body called the Khalsa which could enrich the world at large.

In 1699, Guru Gobind Singh stood before tens of thousands of his followers who had traveled from far and wide to assemble at Anandpur Sahib, the city originally planned by his father in 1665. Speaking to the assembly, he began by calling for five followers to volunteer their heads in sacrifice. He took the first volunteer inside his tent and returned, alone, carrying a sword covered in blood.

He requested another volunteer and repeated this process until, at last, he returned with all five, alive but now dressed as kings in turbans. The five came from diverse castes and far-flung geographical regions. One was from Delhi, one from Gujarat, one from Karnataka, one from Lahore, and one from Orissa. Four of them were originally members of the oppressed classes. Now, however, the differences and divisions of their old identities were to be abandoned as the Guru stripped them of their caste names and baptized them all as “Singh” (lion). Instead of “worms” these men were to be lions.

“From now on, you have become casteless,” declared the Guru. In a single statement, he upheld the equality of men and women, the shared humanity of all people, the plight of the poor, and the distinctiveness of the Sikh religion. He further declared:

“No ritual, either Hindu or Muslim, will you perform and believe in superstition of no kind, but only in one God who is the Master and the Protector of all, the only Creator and Destroyer. In your new order, the lowest will rank with the highest and each will be to the other a brother…. Women shall be equal of men in every way…. Serve the poor without distinction of caste, color, country, or creed. My Khalsa shall always defend the poor.”

Then the Guru bowed, submitted himself to the five, and asked them to similarly anoint him a “Singh.” He had so much faith in the commitment of the Khalsa that he surrendered himself to the institution.

“It was reserved for Nanak to perceive the true principles of reform, and to lay those broad foundations which enabled his successor Gobind to fire the minds of his countrymen with a new nationality, and to give practical effect to the doctrine that the lowest is equal with the highest, in race as in creed, in political rights as in religious hopes.”

In context of the Republic Day 2020 farmers protests, it’s important to note that, even as Nishan Sahib was raised at Lal Qila, protestors — many of whom were carrying the Indian tricolor themselves — left the national flag untouched and respected. “The inspiration for the protesters’ act comes from Baghel Singh, the Sikh general who had hoisted the flag at Red Fort after emerging victorious in his conflict against Mughals,” reports The Quint.

Nishan Sahib, flying over Lal Qila, historically represents the spirit of the Khalsa as they fought — like underdogs — against an oppressive empire.

No matter who the ruling elite is, the spirit of Sikhism teaches it is the duty of the Khalsa to oppose oppressors.

Commentary largely taken from Captivating the Simple-Hearted: A Struggle for Human Dignity in the Indian Subcontinent by Pieter Friedrich and Bhajan Singh.

Nishan Sahib — Flag of the Khalsa — Over India’s Red Fort on Republic...