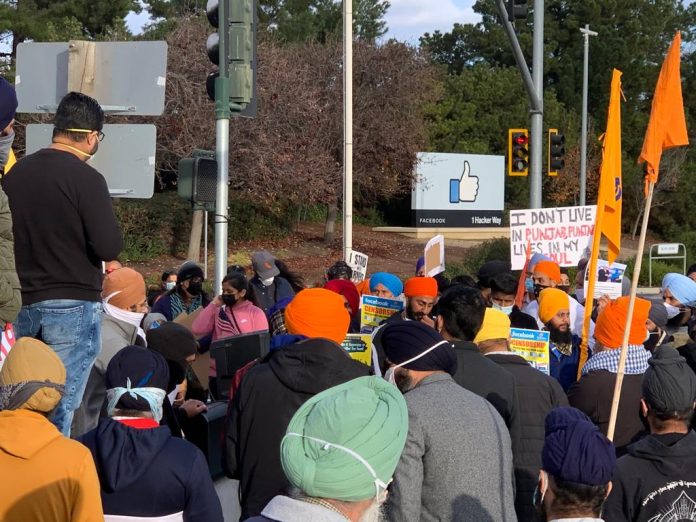 MENLO PARK, CA (KP) – Members of the Punjabi Sikh community and pro-farmer activists held a vociferous protest outside Facebook’s Bay Area Headquarters in Menlo Park, California, demanding the social media giant to stop unwarranted censorship of content posted in support of pro-farmer protests that have spread across India in the past few weeks.

The protesters demanded Facebook to stop suppressing and censoring Facebook and Instagram content posted by farmers, farming unions, and their supporters. The protesters allege that Facebook is unfairly targeting pro-farmer protest content on its platform as it is heavily invested and financially intertwined in conglomerates that are behind the corporate takeover of the traditional agriculture structure in Punjab and across India.

Facebook, Inc. has invested billions of dollars in various Indian corporations that are clamoring to dominate and privatize the traditional farming infrastructure across India, with help from the central Government which has unilaterally enacted laws to make the takeovers possible.

In reaction, there has been a universal outcry from legal scholars, human rights advocates, and the vocal Punjabi diaspora who have deep roots in agriculture in their native Punjab and also across North America, Australia and many other regions outside of India.

In the past members of Sikh community who have posted about human rights violations in India against minorities have also had some of their content  and hashtags removed or restricted raise questions about who is influencing and pressuring Facebook to take such biased action against anyone posting content that questions any policies of the Indian Government or supports those who assemble peacefully to protest.

Many posts in support of the farmers have been flagged, removed or censored with a message from Facebook along the lines:

According to the investigative journal ProPublica, Facebook offers little recourse for their censorship decisions and no formal appeals process for the end user.

The protesters alleged that Facebook CEO, Mark Zuckerberg is trying to please Indian oligarchs, Mukesh Ambani and Gautam Adani and the Indian Government which has steamrolled anti-farming legislation through the Indian parliament during the COVID-19 pandemic without any consultation or input from the agricultural sector or opposition parties.

Tens of thousands of farmers across India have been protesting outside the Indian Capital of New Delhi since November 26th camping out and blockading major highway arteries into New Delhi in cold weather before they were assaulted by authorities using brutal tactics including tear-gas and water cannons.  The farmers are demanding the repeal of three anti-farming laws that were passed by India’s right-wing Hindu ruling party, the Bhartyia Janata Party (BJP).

The protesters also pointed out that while Facebook is suppressing content related to human rights issues, and the farmers’ plight, it is are turning a blind eye to open hate based content being posted by ultra-right-wing Hindu extremist militant groups such as the Bajrang Dal, a Hindu militant outfit that has incited hate and violence against Muslims, Christians, Dalist, and other Indian minorities.

The Bajrangis are an intricate part of the Rashtriya Swayamsevak Sangh (RSS) the Hindu nationalist, paramilitary organization to which Indian Prime Minster Narendra Modi also belongs to.

While the Indian media itself is largely submissive and in allegiance with the ruling BJP government, and has tried to vilify the peaceful farmers calling them “terrorists”, “Naxalites” (Maoists), and Pakistani and Chinese infiltrators, social media platforms are often the only viable option the protesting farmers and their supporters have in spreading their real message and sharing their plight with the world.

In 2018, United Nations criticized Facebook for failing to prevent its platform being used to fuel ethnic violence against the Rohingya people in the neighboring country of Myanmar – saying the service had played a “determining role” in that crisis.

Other critics have pointed out that social media platforms that were once a medium and  voice of the unheard, and the oppressed have now become platforms for profit and power and often placating fascist regimes, oligarchs and hate groups rather than their victims.