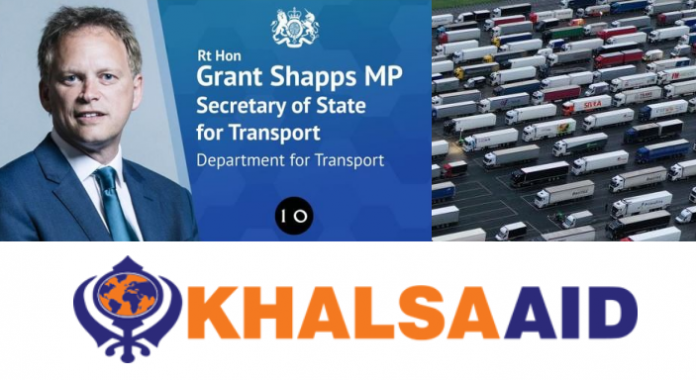 LONDON, UK (KP) – Whereas certain Indian media outlets are busy attempting to undermine the charity work and image of the largest Sikh humanitarian organization, Khalsa Aid, the British Government openly thanked the NGO and its founder for their services during a recent crisis in UK.

During the last week of December, thousands of truckers in England were caught in a massive jam on highways near port town of Dover once France banned travelers and freight from the UK after the discovery of a more infectious variant of COVID-19 that has been spreading through England for the past few weeks.

The truck drivers were stranded on the roads with no water or food and little assistance from authorities, but international humanitarian organization, Khalsa Aid, quickly mobilized their volunteer staff and coordinated with local Sikh Gurdwaras by offering free hot meals for the affected drivers directly to them on the congested highways.

In a letter of gratitude, the British Secretary of State for Transport, Rt. Hon. Grant Shapps  stated that the kindness of Khalsa Aid volunteers “has played a vital role in safeguarding the welfare of the haullers stranded at the border and undoubtedly lifted their spirits at a difficult time.” and concluded that “the best of Britain has risen to the challenge once more and I cannot thank you enough. Extraordinary effort for the which the whole nation is grateful”

Humanitarian Relief on  the Front Lines in UK and India

Khalsa Aid has been on the front lines in the Indian capital of Delhi providing food, and necessities to thousands of farmers who are camped out around the outskirts of the city to protest the recently passed “black” anti-farmer legislation that has been enacted without consultation.

Khalsa Aid thanked those who were actively supporting the farmers protest on their official website, and stated that the organization is “honoured to be supporting the protests on the ground through our India team, who are working to provide Langar and other essential commodities at this time.”

Certain Indian media outlets, including the government leaning “Zee News”, without any evidence, has attempted to tarnish the image of not only the protesting farmers as anti-nationals, and leftists, but also attacked the humanitarian work of Khalsa Aid by labeling the CEO and founder Ravinder Singh a “Sikh militant” who was being funded by overseas “terror” organizations.

The allegations, which have received fierce public backlash on social media, have been vehemently refuted by Khalsa Aid and signaled possible legal action against media outlets that are spreading such baseless allegations with no merit.

The acknowledgement by British Secretary of State for Transport and the full spirited support by the Sikh community at large is just the latest evidence that the humanitarian work of Khalsa Aid is appreciated on a international basis despite the ongoing efforts to tarnish it’s image by certain Indian media outlets.