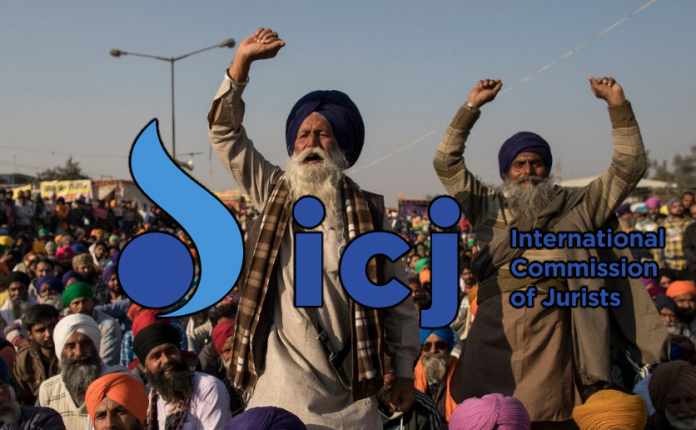 The ICJ today condemned the unlawful repression of peaceful protests and urged the Indian authorities to respect the right to freedom of assembly of Indian farmers who have been demonstrating in Delhi since November 26, 2020 against newly promulgated agricultural laws.

GENEVA, SWITZERLAND – Since early February 2021, police have used metal barricades, cement walls and iron nails to block the roads leading to Tikri, Singhu, Ghazipur, the three main borders where the farmers have assembled. They have done so to prevent any vehicles from these areas entering Delhi. The barricades have also served to deny male and female farmers and their families, including children, consistent access to water and sanitation facilities. The protests at these sites over the past two months are reported to have been peaceful.

Thousands of farmers from all over India, and most heavily from Punjab, Haryana and Uttar Pradesh, have demanded the repeal of a new set of agricultural laws, fearing that these will serve to eliminate government protections for crop prices and thereby impact their livelihoods.

Two journalists were detained and assaulted for reporting from the ground, while nine senior journalists have been threatened with criminal charges including sedition charges by the Indian Government. More than 125 persons, including farmers and also bystanders have reportedly been arrested largely in response to a violent clash that occurred on 26 January 2021. At least 21 farmers are reported to be currently missing.

“Rather than protecting the right to peaceful protest as required by law, the Indian authorities have cracked down on farmers in an arbitrary and aggressive manner, using unlawful force and preventing free movement as well as access to essential facilities”, said Ian Seiderman, ICJ’s Legal and Policy Director.

The Indian Supreme Court on 17 December 2020, upheld the right to protest of farmers calling it “part of a fundamental right” which can be exercised “subject to public order”. The Court has further said that “[t]here can certainly be no impediment in the exercise of such rights as long as it is non-violent and does not result in damage to the life and properties of other citizens and is in accordance with law.”

“The suppression of the right to peaceful assembly has become a pattern in India, as we saw in December 2019 and January 2020 with the mass arrests of students and human rights defenders who were protesting against the Citizenship Amendment Act,” said Seiderman.

The ICJ called on the responsible authorities to remove barricades around protest sites, enable access to water and sanitation facilities and to desist from further arbitrary arrests.

The three contentious farm laws being the Farmers’ Produce Trade and Commerce (Promotion and Facilitation) Act, 2020, Farmers (Empowerment and Protection) Agreement on Price Assurance and Farm Services Act, 2020 and Essential Commodities (Amendment) Act, 2020 were brought in through executive ordinance without legislative consultation and adequate scrutiny and received presidential assent on 27 September 2020.

Farmer unions from Punjab, Haryana and Uttar Pradesh began to set up protest sites on the borders of Delhi on 26 November 2020. There have been a series of unsuccessful negotiations between the Ministry of Agriculture and Farmers Welfare and the farmer representatives. In response to the protests, the Indian Supreme Court on 12 January ordered the suspension of the “implementation of the three farm laws until further orders”. The Court set up a four-person expert committee to negotiate between farmers and the Government. However the committee’s efforts have become stalled.

On 26 January, India’s Republic Day, some tens of thousands of farmers drove into Delhi in tractors, with some protestors deviating from the sanctioned routes permitted by the Delhi Police. There were clashes with the police where one protestor was killed in the violence, and nearly 400 policemen were injured. Some protestors also entered the Red Fort, an historical monument, and hoisted the Sikh religious flag on a flagpole.

On 29 January, police and at least some private forces tried to forcibly disperse the protests on Ghazipur, Singhu and Tikri borders through stone pelting and baton charging. Farmer protestors allege that the some of those working with the police were associated with Rashtriya Swayamsevak Sangathan (RSS), the ideological outfit associated with the ruling party Bhartiya Janata Party.

On 6 February there was a three-hour blockade on state and national highways placed by farmers throughout large parts of India in protest against the agricultural laws, the government’s measures against the protestors and the reduction of budgetary allocation for farmers.

Freedom of assembly is protected under the International Covenant on Civil and Political Rights, to which India is a party.