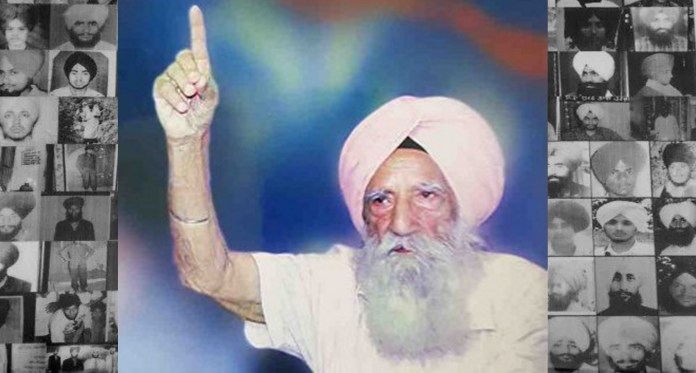 CHANDIGARH, PUNJAB (KP) –   Sikhs organizations mourned and eulogized the passing of prominent human rights activist and former Punjab and Haryana high court justice, Sardar Ajit Singh Bains. He passed away on the evening of February 11th from natural causes at the ripe age of 99.

Justice Bains spearheaded the Punjab Human Rights Organization (PHRO) which unraveled human rights crimes and violations committed by the Indian authorities in Punjab during the turbulent 1980s, and beyond.  The violations included extrajudicial arrests, prisoner torture, and countless staged encounters and the methodical killing of Sikh youths throughout Punjab.

Justice Ajit Singh Bains was arrested on April 3rd of 1992 by Chandigarh and Punjab police and charged under the Terrorist and Disruptive Activities (Prevention) Act (TADA) for a speech he allegedly made at a Sikh religious event on 18 March 1992 in Anandpur Sahib, but was eventually released after widespread international outcry, including from Amnesty International.

India Today, after his 1992 arrested stated: “He was handcuffed, manhandled, finger-printed and illegally detained by the police. It was only after more than 52 hours of detention and rigorous interrogation that he was produced before a district magistrate on April 5, only to be remanded to police custody for two more days.

The Congress (I) Government led by Chief Minister Beant Singh, peeved at Bains’ denunciation of police excesses, was looking for an opportunity to nail him. The Anandpur Sahib conference provided the perfect pretext. But his detention stirred up a hornet’s nest that the Government hadn’t bargained for. Sikh organisations and human rights groups abroad attacked the manner in which such an eminent man was being treated.”

Along with many exposés, and reports, in 1988, Justice Bains published the “Siege of the Sikhs : Violation of Human Rights in Punjab” which covers human rights issues in the Punjab and the problem of Center-State relations, including the present situation in perspective and a historical perspective of patriotism of the Sikhs.

Sardar Ajit Singh Bains was born in the village of Bada Pind in Jaladhar, and studied law in Lucknow, and his lengthy law career began back in 1954, eventually bringing him to a pinnacle as a high court judge, a capacity for which he served until May of 1984.

“We lost a warrior human right activist, who always fought against injustice in India. Ex Justice Sardar Ajit Singh Bains is no more. His work and dedication towards Sikh Nation will be remembered forever.” – Saka Nakodar (activist site)

“End of an era – Loud voice for protection of human rights in Punjab #JusticeAjitSinghBains has expired…He was first & only judge in India who slapped with sedition charges during Beant Singh govt but he didn’t succumb to the pressure & stood his ground till the last breath.
Rest in power sir 🙏” – Sarabjit Singh Verka (Advocate and Principal Investigator PHRO)

“Justice Ajit Singh Bains was an excellent judge, a compassionate human being, and a passionate defender of human rights. His contribution to the painstaking and diligent work of exposing the atrocious record of violations of human rights by the Punjab Government will always be remembered. He defended the rights of prisoners and undertrials, vulnerable sections of society and the working poor.”