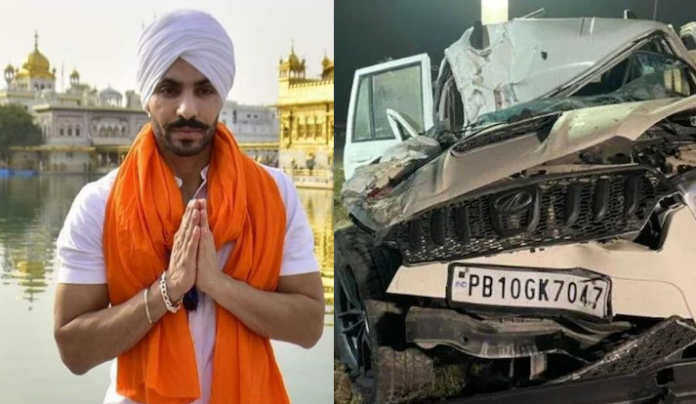 LUDHIANA, PUNJAB (KP) – Thousands of mourners paid tribute to the iconic Punjabi Sikh lawyer and actor turned activist Deep Singh Sidhu during an emotional farewell at the village of Thrike, Ludhiana where his family resided.

The emotional tribute and mass attendance were reminiscent of the outpouring given to prominent Shaheeds (slain Sikh activists) during the 1980’s and 1990’s by the Sikh community.

Sidhu, who died on Tuesday in a fatal car crash near the Delhi Haryana border, had been a popular key activist during the ‘Kissan Morcha’ (farmers’ agitation) at the Delhi border last year – in protest of the black farm laws enacted by Narendara Modi’s right-wing Hindu party.   Recently, he had been campaigning for Shiromani Akali Dal (Amritsar) in the upcoming assembly elections in Punjab.

Several family members, including Deep Sidhu’s uncle Suba Singh, and other attendees alleged that the activist’s untimely death was a planned conspiracy hatched by government agencies or detractors as they saw Sidhu as a political threat due to his rising popularity amongst the Punjabi and Sikh communities across India and abroad.

Tributes for Deep Sidhu were arranged in various Gurdwaras in North America, Europe and other countries by the Sikh diaspora including rallies and gatherings across Canada, America, and Europe at which Deep Sidhu is being eulogized for his service and dedication for the Sikh Panth, and Punjab.

Many activists abroad also maintained that circumstances leading to his death were suspicious in nature and needed to be investigated by an independent body. According to initial police reports, Sidhu’s car rammed into a large carrier truck in front of him that had abruptly came to a halt in the middle of the busy highway. The truck driver quickly fled the scene and is currently wanted for questioning by the Haryana police.

In the fall of 2020, for several months, Deep Sidhu organized a venue at Punjab-Haryana’s Sambu border, where he openly raised issues of the black farm laws, the ongoing desecration (beadbi) of Guru Granth Sahib Ji’s Saroops, and many other injustices the people of Punjab were victims of for the last several decades.

He was one of the first individuals to reach the Delhi border site which later became the center of the more than yearlong Kisaan morcha. He attracted hundreds and thousands of followers and sympathizers on social media on which openly discussed issues such as self-determination and Sikh sovereignty.   Sidhu often stated that he had legitimate concerns that his views and would not be accepted by those in power, and it was just a matter of time before he would be incarcerated or physically harmed.  His predictions seem to have become true.

During the Kissan March on Delhi, Deep Sidhu unabashedly defended the hoisting of the Nishan Sahib on the Red Fort on January 26th of 2021, citing it as an integral Panthic tradition and right which had been practiced by Sikh Sardars dating back several hundred years when they defeated various invading armies to liberate the Delhi capitol on many accounts.  The Nishan Sahib was above all worldly flags, he insisted.

Sidhu was arrested and charged criminally for taking part in the January 26th march on Delhi’s Red Fort and was currently on bail with a condition that his GPS location be shared with authorities.