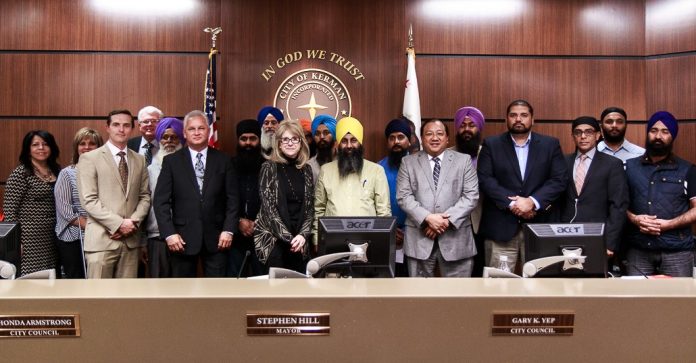 LOS ANGELES, CALIFORNIA – The City Council of Kerman, California headed by Mayor Stephen B. Hill passed a resolution on Wednesday recognizing the 1984 anti-Sikh violence in India as ?Genocide?.

November 4th City Council of Kerman resolution No. 15-61 resolves “Recognizes November 1984 violence against Sikh lives, properties and places of worship throughout India, was carried out with intent to destroy the Sikh community and was thus “Genocide” as defined under the laws of the United States and the UN Genocide Convention of 1948?.

The Kerman resolution further “calls upon Barack Obama, the President of the United States and the Congress to recognize anti-Sikh violence of November 1984 as “Genocide”.

Mayor Hill addressing the City Council stated “1984 is more than anti-Sikhs riots, but rather it was an organized destruction of a people which fall under the term of a genocide and any genocide should be dealt with both locally, nationally, and internationally and from a world view point.”

“I can only hope in the months, years ahead that the United States of America, our president, president Obama, our supreme court and untimely the United Nations will step up to the plate and do exactly what they should do and that is register this as a genocide and help find a way to bring justice to these people? added Mayor Hill in his concluding remarks.”

The resolution recognizing anti Sikh violence as “Genocide” has been passed on the request of national advocacy group “Sikhs for Justice” (SFJ), which is spearheading an international campaign to seek justice for the victims and recognition of 1984 anti-sikh violence.

“Kerman City Sikh Genocide Resolution will highlight 31 years of denial of justice and successive Indian governments attempt to deliberately misled the world into believing that the 1984 killings were “riots” when there is ample evidence to the contrary.” stated attorney Gurpatwant Singh Pannun, legal adviser to SFJ.

“Efforts are now being in progress to bring a bipartisan resolution in the US Congress on the issue of November 1984 genocidal violence” added attorney Pannun.

Earlier, Sikh right group also organized a petition that garnered more than 30k signatures calling on the White House to recognize the November 1984 violence against Sikhs as “Genocide.”

In November 1984, after two Sikh bodyguards assassinated Indira Gandhi to avenge military attack on the holiest Sikh shrine – the Golden Temple, the organized violence against the Sikh community resulted in more than 30,000 killed; thousands of women raped; hundreds of Sikh Temples burnt and more than 300,000 displaced in a span of few days.