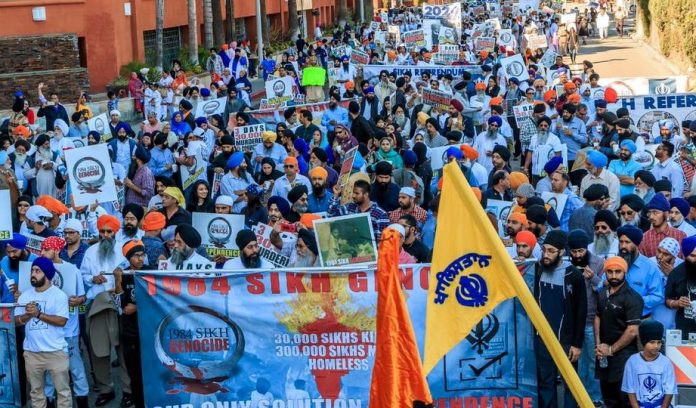 LOS ANGELES, CA – Some saw the slaughter. Others were raped. All wanted justice decades after a genocide they say happened in far-off India.

More than 1,000 ethnic Sikhs marched across Los Angeles on Saturday to mark the 31st anniversary of what they say had been an orchestrated attack upon a religious minority. Three days of bloodshed left 30,000 dead, 300,000 homeless and hundreds of Sikh temples in ruin.

?This is genocide,? said Gurpatwant S. Pannun, legal advisor for the U.S.-based Sikhs for Justice, and organizer of the march. ?It?s been 31 years since more than 30,000 were killed in broad daylight. This most signifies a denial of justice.

“We are advocating for a referendum to liberate Punjab from Indian occupation. We want independence.”

The Consulate General of India in San Francisco, which serves California and western states, was closed Saturday, with no one available for comment.

The Sikh protest of the 1984 genocide and subsequent alleged civil rights violations in India occurred as some call for a 2020 referendum for an independent Punjab.

Last month, violence rocked the Indian northern Indian state during Sikh protests of desecration of its holy book. During one demonstration, two Sikhs were killed and scores injured.

Three days of killing, rape and pillage against Sikhs occurred decades ago in retaliation of the death of Indian Prime Minister Indira Gandhi. She was killed on Oct. 31, 1984, by two Sikh bodyguards to avenge a military attack upon the Sikhs? holiest shrine, the Golden Temple, following a demonstration. The attacks on Sikhs occurred from Nov. 1 through Nov. 3.

On Saturday morning, Sikhs from across California marched from the Beverly Center a mile down Beverly Boulevard to the Los Angeles Museum of the Holocaust. The men wore traditional Sikh dumalas, or turbans. The woman wore Indian salwars. An estimated 100,000 Sikhs, mostly immigrants from India, live in Southern California. Wielding signs that said, ?1984 Sikh genocide solution: independence,? inscribed with black-and-white photographs of the slaughter, they recited a Punjabi chant that said “God is truth.”

Many had witnessed the days of violence that exploded after the prime minister’s death.

They recalled mobs of mostly Hindu attackers, who they say were led by officials of the Indian government, who burned Sikhs to death by throwing rubber tires and flammable chemicals around their necks.

When the violence began, Jasbir Singh, then 19, doffed his telltale turban and cut off his Sikh-style beard. He was standing on a curb outside the New Delhi hospital where Gandhi lay when said he saw a member of the Indian Parliament address a crowd.

?You have three days to each kill six Sikhs – or as many as you can – because Sikhs have killed our mother, Indira Gandhi,? Singh, 49, of Hayward, recalled the MP saying. “Avenge her death and nobody will touch you.”

J.S. Bedi was 24, also living in New Delhi, when he saw mobs come into his upscale neighborhood and rob scores of homes, only singling out those owned by Sikhs, and setting them on fire. ?There must have been a leadership running it,? said Bedi, 55, of Pasadena, now an editor of the India Post. ?The systematic killing began the next day.

?What I would like to see is the guilty brought to justice and some sort of platform where minorities can stand up for their rights, and not be branded as traitors.?

Janki Kaur was a young mother of two with a third child on the way when she attended a brother?s wedding at her mother?s house outside New Delhi. The 27 men in the house were killed, she said, including her husband. Many of the women were also raped.

?I saw all of them dying, in front of my eyes, one by one? said Kaur, 55 of Hayward, choking back tears. ?They were called out of the house. Tires were thrown around their necks. A white powder was tossed on them. They were burned.?

Mohender Singh said he was almost 2 when his father, grandfather and two uncles were murdered.

“(They) were butchered into small pieces,? said Singh, 32, a truck driver living in Hayward, wearing a French blue bana, or Sikh tunic, with a white sash. ?They were alive. They took out their eyes, their hands and legs were cut off, and they were burned with kerosene.

“For 31 years, my family has been going to court seeking justice but all of the killers are roaming free,” he said. “If we do this kind of march in India, they beat us.”