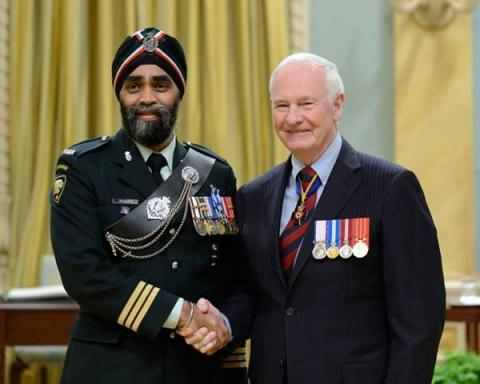 OTTAWA, CANADA (SNN) – Harjit Singh Sajjan, an observant Sikh and a member of the Canadian Parliament, was chosen as the country’s new Defense Minister by Prime Minister Justin Trudeau, as he was finalizing his 30-member cabinet, which included three other ministers of Sikh origin.

Harjit Singh is a decorated Lt. Colonel in the Canadian Military, and was elected as a Member of Parliament from Vancouver South.

He is a combat veteran who has served in Bosnia and has had several deployments to Kandahar, Afghanistan, and has received numerous military honors, including the Meritorious Service Medal in 2013, for helping reduce the Taliban’s influence in Kandahar.

Harjit Singh Sajjan grew up in the Vancouver area, and has also worked as a detective with the Vancouver Police Department’s Gang Crime Unit.

The World Sikh Organization of Canada (WSO), applauded the appointment of Harjit Singh and several other Sikhs to notable cabinet positions, including:

WSO President Dr. Amritpal Singh Shergill stated, “Today is a proud day for Sikh Canadians as we see a record number of Sikh MPs serving their country in Canada’s Parliament. Punjabi is now the third most common language at Parliament Hill. With four Sikh Canadians serving in Cabinet, including the first Sikh woman, the Prime Minister has made history. Prime Minister Trudeau has committed to building an inclusive and progressive Canada and we look forward to working with him and his government as we enter a new era in Canadian politics.”