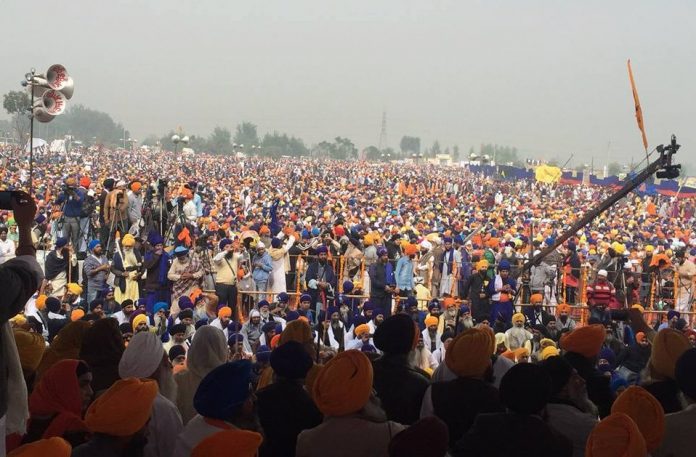 The number of individuals present vary from one hundred thousand to severalÿhundred thousand depending on the source. Despite the varying estimates, the entire arena had overflowed beyond the capacity of the erected structures.

The conclave, which was dubbed as being a ‘Sarbat Khalsa’ by the organizers was tightly controlled by associates of Simranjit Singh Mann, and ex-Damdami Taksal spokesman, Mohkan Singh, and had already prepared the resolutions in advance and pre-selected the names of the new “Jathedars that were to be announced.

Over the past few days many representatives of other organizations had complained about the lack of transparency and structure in formulating the resolutions and selection of ‘Jathedars.’ The actual resolutions and names of individuals to be announced were kept confidential by the organizers and not shared publicly until the last minute. This type of clandestine behavior by the organizers had infuriated many of the attendees who saw this as an once in a lifetime opportunity for the Sikh community to retake control of its destiny , but their objections were either ignored or dismissed.

SUSPICIOUS PAST OF CONTROLLERS

Mohkam Singh, along with former Khalistan Commando Force chief, and Panthic Committee member Wassam Singh Zafarwal, and Gurnam Singh Bandala, are all considered individuals with a questionable past, and are referred by many as police intelligence “cats” for their suspicious roles during the Sikh insurgency during the 1980’s and 1990’s when thousands of Sikh youths were murdered and eliminated, while these leaders ‘miraculously’ not only survived but become quite successful politicians in various Sikh circles despite their “criminal” past. ÿ

Interestingly, one of the Gurmattas declared during the last 1987 Sarbat Khalsa, stated that all ‘Sarbat Khalsa’ functions could only be held at Sri Akal Takht Sahib and not elsewhere, yet this Gurmatta was now openly flouted by Mohkam Singh and his associates who were also present in the 1987 Sarbat Khalsa.

Along with the announcement of the replacement “Jathedars”, the following resolutions were read to the massive audience in attendance:

NO DIRECT ACTION AGAINST BADAL FAMILY MEMBERS OR SIRSA CULT

Ironically no tankhah or punishment was announced to Parkash or Sukhbir Badal, or the Sirsa cultists who are behind some of the most disturbing incidents of sacrilege in Punjab and Haryana.

Several Sikh Personalities, including Jathedar Bhai Ranjit Singh Ji, Missionary preacher Panthpreet Singh, and Ranjit Singh Dhadhrian, who had been very active in the past few weeks were conspicuously absent from the conclave, while other representatives such as Panch Pardhani, and Dal Khalsa members, Kanwarpal Singh and Bhai Daljit Singh Bittu stayed in the shadows as mere observers and did not share the dais with organizers.

Sikh parcharak, Bhai Baldeep Singh, who had offered to collaborate with the organizers, shared the following concerns about the process:

“Is lack of values such as ethics, procedure, protocol, inclusive (sic), integrity, vision, honesty, transparency, accountability, sarb-sammati, along with pushing one’s own agenda(s), etc., the name of Sarbat Khalsa? I think not!”

“In the garb of claims to restore honour and dignity of Gur-Sikh Panth’s ailing institutions such as Akal Takhat, SGPC and DSGMC, we cannot dishonour the institution of Sarbat Khalsa outright!”

POINTS OF CONTENTION AND CONTROVERSY