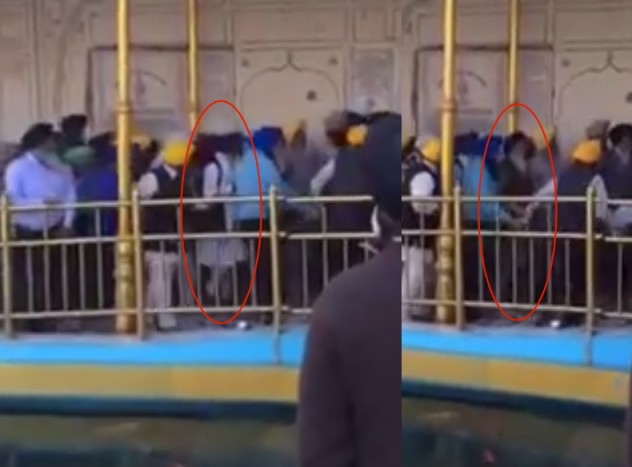 Dal Khalsa, Panch Pardhani, and many other Panthic groups had announced they would not let Gurbachan Singh deliver his address, as he had lost the Sikh community’s faith by ‘pardoning’ Dera Cultist Ram Rahim. Traditionally, the Jathedar of Sri Akal Takht Sahib addresses the Sangat in the evening around 6 pm, but the SGPC switched the venue to the ?Darshan Deori? and the actual timing.

While the Panthic groups had indicated that they would not allow Gurbachan Singh to partake in the traditional Divali address to the Sikh Nation from Sri Akal Takht Sahib, the SGPC was adamant that no one would be allowed to interfere in their celebrations.

In desperation, the SGPC coaxed Gurbachan Singh to deliver his message from the upper floor of the “Darshan Deori” at 3:30pm, but the protesting sangat quickly drowned out his address, forcing him to withdraw.  Fearing for their safety, the SGPC task force security personnel quickly swept Gurbachan Singh and SGPC president Avtar Makkar away from the “Darshan Deori” into a safer area of the complex.

However, Bhai Dhian Singh Mand, who had been declared as “acting Jathedar” by the conclave organizers, while not allowed to enter the Sri Akal Takht Sahib Dias, addressed the sangat from the Takht courtyard in the presence of a large gathering of supporters onlookers.