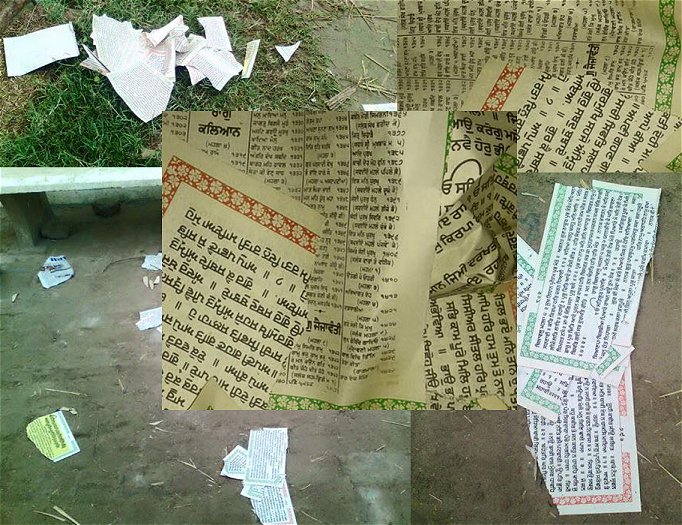 MOGA, PUNJAB (SNN) – In yet another outrage, residents of the village of Malke, near Bargari, discovered dozens of torn Angs of Guru Granth Sahib Ji thrown across the village streets. It is unsure if these Angs are from the same Saroops that were stolen from Burj Jawahar Singhwala which is not too far from this location.

As soon as news of the sacrilege spread, hundreds of Sangat members arrived on scene and gathered at the local Gurdwara Sahib in protest of the ongoing beadbi that does not seem to end.

According to news reports, investigators are proposing to send the discovered Angs to the state of Gujrat for forensic investigation keeping in mind many of the Angs of have already been touched by the local sevadars who collected off the streets.

The local Sikh community warned the State Administration to either find the perpetrators of this incomprehensible act or they would intensify their protests against them.

This is yet the latest in the spate of beadbi incidents that have been perpetrated throughout Punjab in the last several weeks, and has put the Sikh community on edge as the Police Authorities and State Administration has been unable to get to the bottom of these crimes.