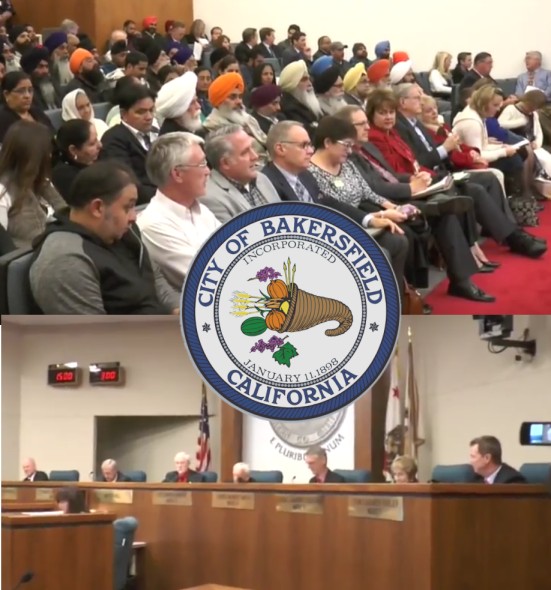 BAKERSFIELD, CA (SNN) – The City of Bakersfield, one of the largest cities in Southern California, issued a resolution recognizing the 1984 anti-Sikh violence in which thousands of Sikhs were systematically killed across India as genocide, and a violation of human rights.

The City Council also condemned any continuing human rights violations against religious minorities in India, and expressed solidarity with the local Sikh population in remembrance of those who lost their lives in the November 1984 violence.

Mr. Jatinder Singh spoke on behalf of the Sikh community and addressed the Council members in regards to the anti-Sikh violence.  A large number of local Sikhs were present in the City Council chambers during the proceedings and televised live on local TV.   Similar resolutions recognizing the 1984 violence as state sponsored genocide were passed by the California Assembly, and several others cities in the U.S.

WHEREAS, Sikhism is the world?s fifth largest religion with more than 26 million followers, founded by Guru Nanak (1469-1549) and based on the teachings of the 10 Sikh Gurus, the Guru Granth Sahib (Sikh Holy Scripture), and that all people have the right to follow their own path to God; and

WHEREAS, more than 35,000 Sikhs live and work in the City of Bakersfield and the surrounding areas, making vital contributions to the well-being of our community; and

WHEREAS, organized and systematic violence was carried out against the Sikh population throughout India in the aftermath of the assassination of Indira Gandhi, India?s prime minister, on October 31, 1984; and

WHEREAS, the violence against the Sikhs continued unabated for several days in more than 100 cities across India resulting in over 30,000 Sikhs killed, thousands of women raped, hundreds of Gurdwaras (Sikh Temples) burnt, and more than 300,000 Sikhs displaced; and

WHEREAS, in 2011, a mass grave of Sikhs was unearthed in the village of Hondh-Chillar, state of Haryana, which was followed by the discovery of other mass graves, ruined villages, burnt Gurdwaras and other traces of Sikh population annihilation during November 1984; and

WHEREAS, such heinous actions against the Sikh?s were a clear violation of human rights and constituted genocide as defined under the laws of the United States and the 1948 United Nations Genocide Convention; and

WHEREAS, it is important to the Bakersfield community that we acknowledge such history in order to declare such acts atrocious, voice our hope that those responsible are punished, and express appropriate sympathy so that history does not repeat itself.

NOW, THEREFORE, BE IT RESOLVED by the City Council of the City of Bakersfield as follows:

1. The above recitals are true and correct and incorporated herein.

2. The Mayor and City Council of the City of Bakersfield:

A.     Recognize that the November 1984 violence against Sikh lives, properties, and places of worship throughout India was carried out with intent to destroy the Sikh community and constituted genocide.

B.     Condemn any continuing human rights violations committed against the religious minorities in India.

C.     Express our support for the local Sikh community as they remember the lives lost and those who came to the defense of Sikhs during the November 1984 violence.

I HEREBY CERTIFY that the foregoing Resolution was passed and adopted by the Council of the City of Bakersfield at a regular meeting thereof held on (12-9-2015), by the following vote:

ROBERTA GAFFORD, CMC
CITY CLERK and Ex Officio Clerk of the Council of the City of Bakersfield