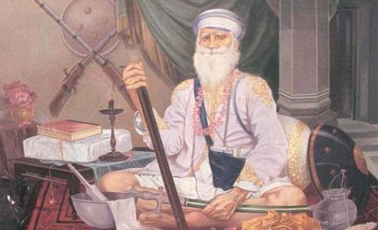 “Unlike many other communities, the Sikhs in Singapore can trace the exact origin of their presence on the island to one man: freedom fighter Bhai Maharaj Singh.”

The saint-soldier is the first Sikh in recorded history to step foot in Singapore, sent by the British in 1850 as a political prisoner.

To mark the nation’s Bicentennial celebrations, a documentary detailing Bhai Maharaj Singh’s life and influence is in the works, with a trailer released yesterday at the Blackbox at Fort Canning.

The 60-to-75-minute-long documentary entitled “Saint Soldier – Uncovering the Story of Singapore’s First Sikh”, is targeted for release in December.

It is directed by Ms Upneet Kaur-Nagpal, 40. Mr Simranjit Singh, 40, is the executive producer.

Mr Singh, who runs a healthcare company, said he was inspired to create the documentary as he felt that not many Sikhs in Singapore know the story.

Bhai Maharaj Singh led the movement against British occupation in the Indian state of Punjab, but was arrested and dispatched to Singapore’s Outram Prison where he died in 1856.

There is a memorial to him at the Silat Road Sikh Temple, also known as the Gurdwara Sahib Silat Road.

Said Mr Singh: “I have a special connection to the temple because I lived near there, and I spent my childhood at the memorial watching the Sikhs and non-Sikhs visit it.”

In the past, many custodians of the memorial would tell the story of Bhai Maharaj to visitors, he said.

“But many of them have passed on, and many of the stories are gone, and I realised that much of the younger generation of Sikhs did not have an understanding of who Bhai Maharaj was. They are not connected to the story any more,” he said.

He was thus determined to re-tell the story.

To recreate the story, Ms Kaur-Nagpal said the team travelled all around the world to trace the life of Bhai Maharaj. She said she saw his story as a portal to that of the Sikh diaspora in Singapore.

The founding of the Sikh community on the island stemmed from the formation of a small Sikh contingent in the police force in the 1880s, after Bhai Maharaj Singh’s death.