(Sikh News Network) (Sept 6th. 2019) – For the past few years, rogue kathakars, parchariks, and kirtanis such Nihang Dharam Singh “Sach-Khoj” academy, Harpreet Singh Gill (Toronto), and Amarjit Singh Halwara have been misleading the sangat  and have made countless blasphemous remarks against Bannees in various Sikh Scriptures including Sri Dasam Granth Sahib, and Vaars of Bhai Gurdas Ji /Bhai Gurdas Singh Ji, and against respected Sikhs traditions via various mediums on the internet and social media – without any repercussions or consequences.

Due to the lack of Sikh leadership from the very top levels of Sikh institutions such as Sri Akal Takht Sahib and in Sikh organizations in general these rogue parchariks, and kirtanis have been operating without any restraints in their anti-Gurmat parchar.

We will be highlighting the contents of their venomous agenda over the next few weeks, starting with Harpreet Singh Gill (Toronto) who has been promoted by various “Akhand Kirtani Jatha” circles in countries especially Canada, USA, and the UK.

Details of the misleading parchar by Nihang Dharam Singh, and Amarjit Singh Halwara will be presented in subsequent articles in the near future.

The material presented below is a collections of anti-Panthic statements by Harpreet Singh Gill on internet forums (message boards), FaceBook pages, WhatsApp, and in e-mail message groups.

It should be noted that in 2008, Sri Akal Takhat Sahib had declared Sri Dasam Granth is an inseparable part (“ang”) of the Sikh panth, and asked the sangat to desist from any critical controversy. 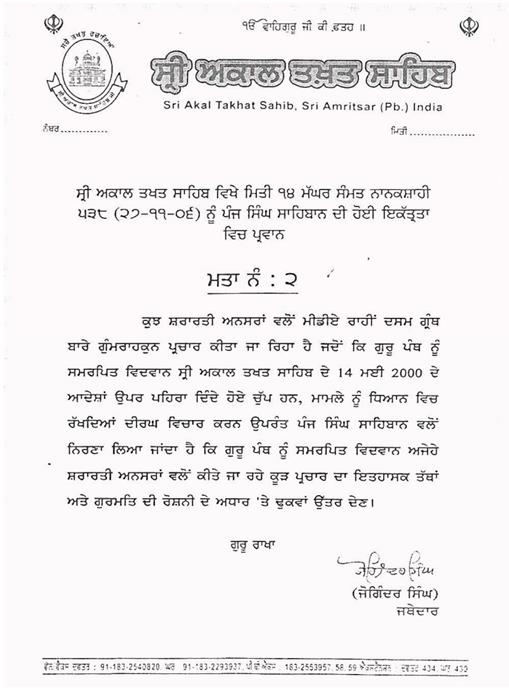 The directives from Sri Akal Takht Sahib, the apex throne of Sikh Spiritual and Temporal power, has not deterred Harpreet Singh from openly challenging the validity of the contents of Sri Dasam Sahib Ji, despite being warned of the serious consequences that might follow.

Screenshot evidence from Harpreet Gill’s FACEBOOK page  (Dec 21st, 2012)  in which he doubts the validity of Sri Dasam Granth, and states that some of the contents are not Gurbani.

His Misinterpretation of verses of Bachitar Natak from Sri Dasam Granth.

HS Gill claims that Guru Gobind Singh Ji never compiled Sri Dasam Granth, and it has contents that are not in line with Gurbani.

HS Gill claims that Sri Charitropakhyian is not ranchna of Guru Gobind Singh Ji and not in line with Gurbani.

HS Gill states that he does not accept certain parts of Dasam Granth as they are lies that have compiled by someone else, and later hints that it was the work of Brahmins.

HS Gill states that certain contents of Bachittar Natak Bani are also not in line with Gurmat, and that they were also added by someone else, implying that this “tampering” is an onslaught by the Brahmins.

HS Gill makes a claim, with no evidence or proof that alterations were made to Sri Dasam Granth Sahib by the Brahmins.

Harpreet Singh Gill states that “stories” from Sri Dasam Granth are translations of Hindu beliefs, and not in accordance to Gurbani.

Harpreet Gill states that a person who believes in Dasam Bani, does not necessarily mean he has to believe in Sri Dasam Granth:

Harpreet Gill states he did not consider parts of Sri Dasam Granth as Gurbani.

In defense of Missionary Sarbjit Dhunda 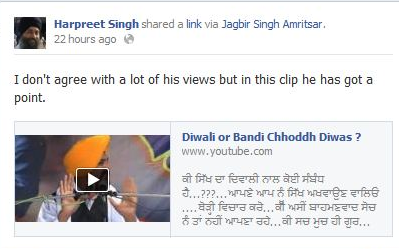 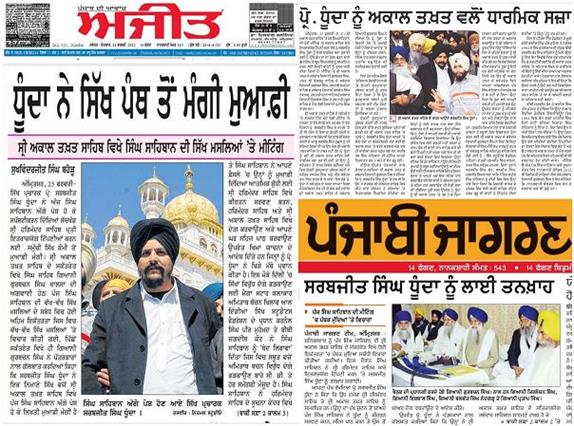 Harpreet Gill, defending and agreeing with Missionary Sarbjit Dhunda (who criticized the recitation of Sri Dasam Bani at Sri Darbar Sahib)  claims that singing the following verses from Sri Dasam Granth Sahib would be also be improper.

Harpreet Singh Gill further states that if someone did further research they can find many more lines from Sri Dasam Granth Sahib Ji that he would never accept as writings of Guur Sahib.

According to Dr. Trilochan Singh Ji, who was a close associate of Bhai Sahib Randhir Singh Ji (Narangwal), and a learned scholar of Sikhism, the couplets ਦੇਗੋ ਤੇਗੋ ਫ਼ਤਹ ਨੁਸਰਤ ਬੇਦੁਰੰਗ… were written by Guru Gobind Singh Sahib Ji, and are found in a handwritten HukamaNama to Mata Sahib Kaur Ji, and in another HukamNama handwritten by Guru Sahib Ji that was sent before the Chamkaur Sahib battle to his nephews. 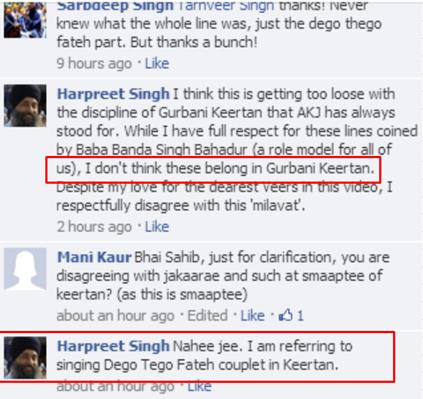 Bhai Gurdas Singh’s (also known as Bhai Gurdas Ji Dooja)
famous Vaars have been published along with Bhai Gurdas Ji’s 40 Vars by the SGPC, and by Bhai Veer Singh Ji’s Teeka of the 40 Vaars.

The Vaars are also published in the “Amrit Kirtan” pothis that have been prevalent in the Akhand Kirtan Jatha for the last 50+ years, in both Khalsa Brothers and Singh Brothers editions of the Pothi. This pothi was compiled during Bhai Randhir Singh Ji’s time, and the Vaars of BOTH Bhai Gurdas Ji and Bhai Gurdas Singh Ji have been read by Pannthic prominent Ragis Singhs, and also recited by kirtanis at jatha smagams for many decades.

Harpreet Gill criticizes the recitation of those Vaars, and openly states that they should not be recited in Kirtan. 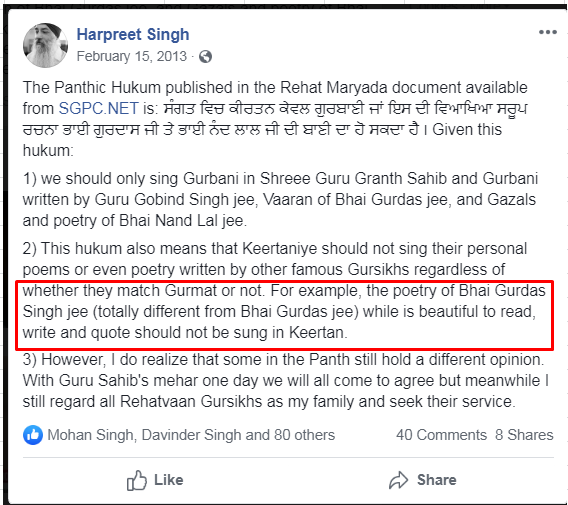 In the coming weeks, we will be publishing details of parchariks Amarjit Singh Halwara, and Kathakar Dharam Singh Nihang, so the sangat at-large can be made aware of their nefarious parchar, as we have detailed for   Harpreet Singh Gill.

It is paramount that Sikh organizations and Sikh institutions at all level take strict action in accordance to Panthic traditions against such rogue individuals who are continuously misleading the Sikh youth and sangat via their anti-Panthic parchar.