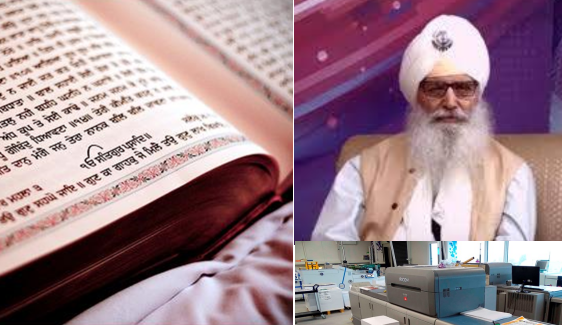 Number of Saroops Printed now revealed to be at least 62

The Canadian businessman Ripudaman Malik, the director of the Satnam Education Trust, is again in the center of another desecration controversy and facing the wrath of Panthic organizations.

In a letter sent to the ‘Shiromani Gurdwara Parbandhak Committee’ (SGPC) by the ‘British Columbia Gurdwara Council’, ‘Ontario Gurdwaras Committee’, and the ‘Ontario Sikh Gurdwara Council’, the three Gurdwara umbrella group representing dozens of Gurdwara Sahibs across Canada alleged that Malik and his associate Balwant S. Pandher have set up a private printing operation at Mr. Pandher’s residence in which they have successfully printed several saroops of Sri Guru Granth Sahib Ji without any consultation or authorization from the SGPC or local Sangat.

It should be noted that on April 9th, 1998, Jathedar Singh Sahib Bhai Ranjit Singh Ji issued a HukamNama (edict) from Sri Akal Takht Sahib forbidding the printing of Saroops of Sri Guru Granth Sahib Ji by any private parties – except by the SGPC and the Delhi Sikh Gurdwara Management Committee (DSGMC).

The letter from the Sikh organizations states that Malik and Pandher violated the HukamaNama from Sri Akal Takht Sahib and challenged its authority.

DEADLINE GIVEN TO MALIK & PANDHER PASSES

In the letter, the Sikh organizations also issued a deadline to Malik and Pandher to turn over all the printed Saroops along with the printing equipment to Guru Nanak Sikh Gurdwara Surrey by 4pm Saturday August 22nd, 2020.

According to eyewitnesses, Malik complained that he wanted to pick the five Singhs of his choice, otherwise he will not meet with them.  Inevitably, the Sangat and the five Singhs left empty handed from the premises.  During this squabble it was discovered that over 55 Saroops had been printed on the printing press and not 15 of 20 as Malik states in his earlier video.

Click to view Press Release by the ‘BC Gurdwaras Council’

The US based ‘American Sikh Council’ has also issued support for the Canadian Sikh organizations and requested strict action be taken against those who violate Sri Akal Takht Sahib’s Hukams.

This is not the first time the Maliks and their associates have found themselves in such controversy, they have a long track record of being involved in situations by flouting Panthic norms and hurting the sentiments of the Sikh community.

(1) In November of 2014, over 400 Saroops of Sri Guru Granth Sahib Ji were transported from India on an unaccompanied passenger bus loaded onto a container ship that finally docked at a port in Vancouver months later.  The bus, which had been damaged, was left at the port along with all the 400 plus saroops inside for several days until clearance was given from the custom authorities. Again, this was a clear violation of Sri Akal Takht Sahib’s orders forbidding the transportation of Sri Guru Granth Sahib Ji’s Saroops via container ships.  Manjit GK (ex-DSGMC chief and Akali Dal Badal official) was also involved in this fiasco.

At that time Malik arrogantly contended that no beadbi was committed by him when bringing these saroops.

(2) In April of 2014, over 100 Saroops of Sri Guru Granth Sahib Ji were being surreptitiously shipped in a shipping container by the DSGMC to the Satnam Education Trust operated by Malik. This container was discovered by the local Sangat and the saroops were unloaded from the container and returned to Gurdwara Sri Rakabganj Sahib in Delhi. No action was taken against Malik or the DSGMC at that time, even though the Jathedar of Sri Akal Takht Sahib was well aware of the situation.

(3) From around 2016 to 2019, Gurdeep Malik, the California based brother of Ripudaman Malik, had been reportedly distributing Chinese printed Saroops of Sri Guru Granth Sahib Ji from the Khalsa Care Foundation which he operates from Southern California. These Saroops are part of the numerous copies printed in China on the behest of a California resident named Thaminder Anand.

Anand has been advertising the “free” distribution of Saroops since at least 2012 on his online website Sikhlink.com. However, in 2016, he began to advertise the Chinese printed saroops. On his site he claims to have the authority to even ship the saroops via mail/parcel.

Thaminder Anand is misleading the sangat by quoting an archaic decision made during the British India Raj in 1944 on his website Sikhlink.com. Sri Akal Takht Sahib clearly forbids the shipping of Saroops in any way via ship, container or parcel.

The Chinese printed saroops have been shipped shrink wrapped in clear plastic like commercial products being sold in the market, which is highly objectionable and disrespectful.

In 2015 the SGPC had filed a case against Anand and sikhlink.com under Section 295-A of the India Penal Code (Deliberate and malicious act, intended to outrage religious sentiments of any class by insulting its religion or religious beliefs).

In reply, he appealed to the High Court and stated “There is no law or clause under the Sikh Gurdwara Act which prohibits the publication and distribution of Sri Guru Granth Sahib. The sole right to print conferred upon the SGPC is self-created right under its own code of conduct. Self-created right has no force of law.”

When Gurdeep Malik was asked about how maryada and satkar was kept when these saroops were printed in China, his reply was that satkar starts when you take the saroops home, we cannot vouch for anything before that.

No one knows how these Saroops, which could possibly number into the hundreds, were printed in Chinese factories, and how they were handled by the workers, and what was done to any Angs that were damaged or misprinted during the process.

Again, no action has been taken by Sri Akal Takht Sahib against Anand or Gurdeep Malik for publishing and distributing the Chinese printed Saroops.

https://www.panthic.org/articles/3671
Container of Holy Saroops Returns to the DSGMC

In the above three cases, by attempting to send the sacred Saroops at least twice in containers and then a bus via a container ship, the DSGMC, the SGPC and Malik tried to circumvent Sri Akal Takht Sahib’s edicts, Panthic Maryada and disobey the wishes of the Sangat that has vigorously opposed the shipping of sacred Saroops of Guru Sahib like commercial commodity. Yet, not a single step has been taken against anyone despite these repeated violations.

Despite being charged in the Air-India bombing case in Canada, Prime Minister Narendera Modi in 2019 raised eyebrows when he removed Ripudaman Malik from India’s purported “black-list” and allowed him to visit India on an official visa.

During that surprising visit Malik appeared on an Indian Talk show with his brother Harjit Malik who shamelessly praised and thanked the Indian prime minister, and the Indian Research Analysis Wing (RAW) Chief Samant Goyal for removing his brother’s name from the “black-list”.

Full video of this conversation is below.

In a video released by one of Malik’s Canadian relatives, Kulbir Singh, he states that the “black-list” is just a sham, and claims that Malik has traveled to India at least three times before his 2019 visit. He states that Malik has been to India in 1982, 1991, and then in 1995 when he met with individuals associated with the Ministry of External Affairs in the “south block” area of New Delhi, where he spent at least 30 minutes inside the Indian ministry.

In 2014, Manjit GK, the controversial Delhi based leader of the Akali Dal (Badal) and DSGMC president, was invited by the Satnam Trust as a “special guest” during the opening of Khalsa Secondary School in Surrey. GK’s visit raked up criticism from various Sikh organizations across British Columbia, due to his close alignment with the anti-Panthic Badal family, and his involvement in the transportation of the 400 plus sacred saroops via a container ship in the same year.

For the last 13 years, there have been repeated attempts by the Malik family and their associates in flouting the edicts of Sri Akal Takht Sahib and the wishes of the general Sikh sangat, and they have been caught red-handed committing sacrilege of Sri Guru Granth Sahib Ji’s saroops on multiple occasions.

The latest episode of printing Sri Guru Granth Sahib Ji’s Saroops at a private Surrey, BC residence in violation of the 1998 HukamaNama from Sri Akal Takht Sahib should be the final straw for the Panthic authorities to initiate strict action against all these individuals – namely, Ripudaman Malik, Pandher, and Gurdeep Malik and Anand so such acts are never committed by anyone again.

Since 1978, the Sikh Panth has faced an onslaught of attacks from external forces such as the neo-Nirankaris, Ram-Rahim cultists, and others. From that time Sikh organizations such as the Akhand Kirtani Jatha and Damdami Taksal played a leading role in standing up against those who were committing beadbi and challenged Panthic authority.

Sadly the leadership of both of these organizations have now become irrelevant, ineffectual, and are often seen siding with those who themselves are guilty of beadbi.

The Dhumma led Damdami Taksal’s open embrace of Shiromani Akali Dal (Badal), and AKJ-BC’s complex and implicit connections, and inter-dependence with the Maliks and Satnam Education Trust cannot be ignored.

Such alliances should not be forgotten or forgiven by the Panth. It is high time for the Sikh Panth to dissociate themselves not only from those who commit sacrilege of the sacred Saroops of Sri Guru Granth Sahib Ji and undermine Sri Akal Takht Sahib Ji’s authority, but also from those who enable and provide legitimacy to these types of individuals and forces.

The Sangat should be aware that the Maliks and the Satnam Education Trust will use their deep pockets to influence the local Gurdwara committees, the Jathedars in Punjab, and shed crocodile tears of repentance and remorse so they can continue to denigrate our institutions and Takhts.