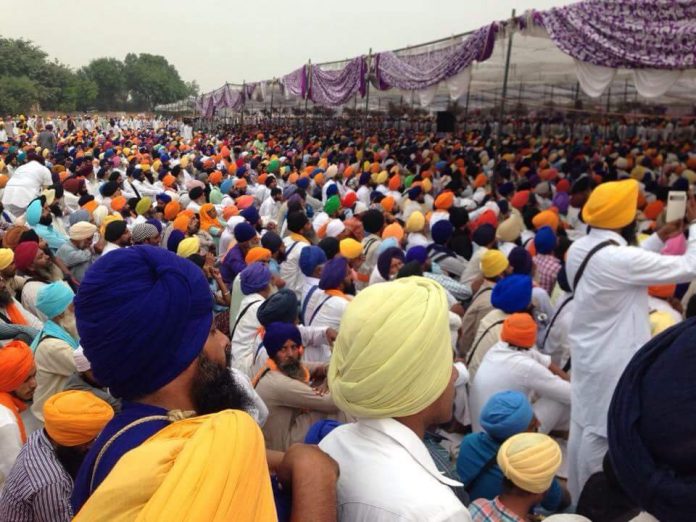 BARGARI, PUNJAB (SNN) – During a massive show of strength by pro-Panthic organizations on the conclusion of the Bhog ceremony for the two Sikh protestors, Bhai Gurjeet Singh and Bhai Krishan Bhagwan Singh, who were recently killed by the Punjab Police, several resolutions were passed against the Badal regime  in Punjab.

The function was attended by tens of thousands of Sikhs including representatives from near every Sikh organization aside from the Sant-Samaj or major Nihang Dals.  They included, Jathedar Bhai Ranjit Singh Ji, Bhai Major Singh Ji (one of the Panj Piarays from Sri Akal Takht Takht Sahib),  Jathedar Balwant Singh Nandgarh, Bhai Ranjit Singh Dhadhree,  Simranjit Singh Mann, Daljit Singh Bittu, Panthpreet Singh, and various representatives from Akhand Kirtani Jatha, Damdami Taksal, and Sikh missionary organizations who all sat shoulder to shoulder on an elevated platform.

Speaker after speaker highlighted the fact that the current Punjab Government lead by arrogant Parkash Badal is the biggest enemy of the Sikh Nation, and the various incidents of desecration are all due to this Government’s policies and conduct.  One thing that was unaninous was the Badal family and their supporters needed to be boycotted by the Panth and be driven out of all Sikh and Punjab institutions.

The nine main resolutions that were announced to the Sangat are summarized as follows:

The conclave game the Badal Government the final deadline of November 15th, to follow up and abide by these demands, otherwise the speakers threatened, a more hardline approach would be chalked out in the near future.

Also missing was Harnam Singh Dhumma from the Damdami Taksal Mehta, and his affiliated Sant-Samaj members.  Many of these individuals have  had a cozy relationship with the Badal Government for the past decade and have openly campaigned on behalf of the Akali-BJP combine.

However, the latest statements from the Nihang chiefs indicate they have now started to criticize the Badal Government openly and give full support to the Panj Piaray of Sri Akal Takht Sahib and the concept of ‘Panch Pardhani.’