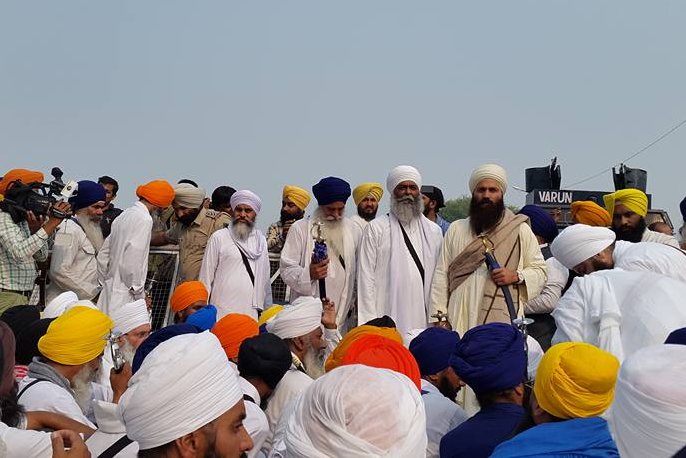 MOHALI, PUNJAB (SNN) – Parcharaks staging a march to “donate” blood to Punjab’s Chief Minister Parkash Badal, and vowing to not move from their “sit-in” dharna until their demands quickly backtracked from their stance and returned empty handed after a snub from the Punjab administration.

The march, organized by Ranjit Singh Dhadrian, Panthpreet Singh, Baljit Singh Daduwal, Karnail Singh Peermohammad, Amrik Singh Ajnala Daler Singh Kheri, and others, in which more than 500 parcharaks participated, were heading to the Badal’s residence in Chandigarh when the Punjab police in Mohali prevented them from continuing any further.

Badal Dal representatives, Sukhdev Dhindsa and Prem Chandumajra attempted to mediate between the parcharaks and the Badal administration.

News of the parcharak leadership’s quick about-face, and failure to stand by their pronouncements is being seen as yet another disappointing example of failure by the current Sikh leadership who are unwilling to take a stand and presevere to attain any tangible goal.

This type of indecisive character is strongly condemned per Gurmat:

As the night fell and the Badal Administration continued to reject the demands of the parcharaks, their leaders quickly backtracked on their stance to not lift the dharna, and instead ended the protest with an absurd gesture of filling a half cup of their blood as an offering to Badal and returned to their homes.

The volte-face by Dhadarianwala, Panthpreet, Daduwal Peermohammed, Ajnala, Kheri, and others is being seen by many as another breach of faith by the self-appointed leaders. The images published in the press of Mohkam Singh and Harcharan Singh amicably holding hands and notion of “Sarbat Khalsa” needing permission from anybody, especially the SGPC or any Badal representative is not just disgraceful and deplorable, but has raised serious doubts about the sincerity of these duplicitous leaders.