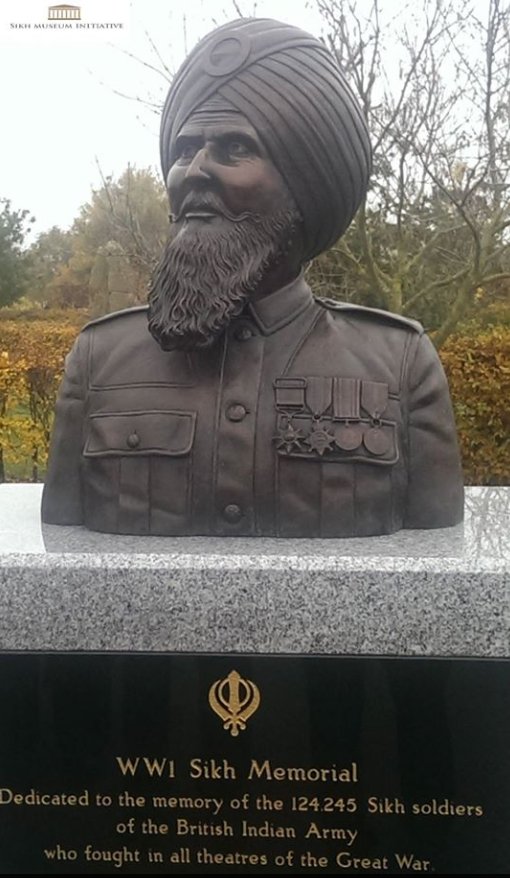 STAFFORDSHIRE, UK – The UK’s first national Sikh memorial in honour of Sikh soldiers who fought during World War One has been unveiled at the National Memorial Arboretum in Staffordshire.

The national WW1 Sikh Memorial statue commemorates the 130,000 Sikh men who took part in the war. More than 150 people pledged over £22,000 to pay for it.Sikhs made up 20% of the British Indian Army in action, despite being just 1% of the Indian population at the time, the WW1 Sikh Memorial Fund said.

The founder and chairman of the charity, Jay Singh-Sohal, said some Sikhs left their towns and villages for the first time “to venture abroad to fight for Great Britain” and “made a contribution when Britain itself didn’t have the troops”. Describing the memorial, he said: “It’s got a large turban, long flowing beard, very much the image of a Sikh soldier from that period.

“[It has] the look and feel of a Sikh solider with the uniform and the medal that they would have been eligible for and would have won as a result of their service.” The memorials patron, Peter Singh Virdee from the Virdee Foundation, says: “The sacrifice of Sikhs who’ve served Great Britain will surely never be forgotten, now that this community initiative has led to the creation of a permanent national memorial at the centre of remembrance in our country. The monument will undoubtedly inspire future generations to follow in the footsteps of their forebears and contribute great things to our society.”

Sir Francis Richards, Chairman Imperial War Museums, says: “The Memorial will be a fitting tribute to the sacrifice made by Sikh servicemen during the First World War and can only serve to increase awareness and appreciation of the Sikh contribution to British military history. Most importantly, it will ensure that we remember in perpetuity those Sikhs who gave their lives in Britain’s defense.”

The unveiling event included speeches from dignitaries, a British Army band and re-enactment troop. The memorial was sanctified with a traditional Sikh prayer and a minutes silence held to remember all who have fought for Great Britain.