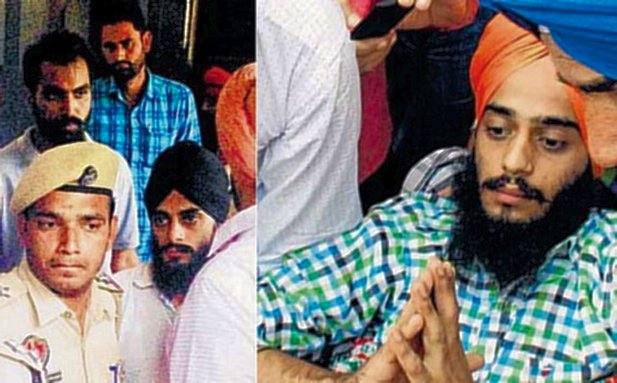 CHANDIGARH, PUNJAB – Lawyers For Human Rights International (LFHRI) released a detailed report regarding Punjab Police’s concocted charges framed against the two Sikh brothers, Rupinder Singh and Jaswinder Singh in regards to the Bargari beadbi incident. Both of the youths are currently under the custody of the Punjab State Police despite repeated efforts to have them released on bail. Rupinder Singh is currently undergoing medical treatment due to spinal injuries suffered during the Police assault.

BRIEF BACK GROUND OF THE MATTER

On October, 14 2015 a police party started lathi charge and firing on Sikhs who were peacefully protesting against the incidents of sacrilege near Village Behbal Kalan, District Faridkot, Punjab, and two Sikhs Kishan Singh and Gurjit Singh were killed in police firing.

Thereafter  the protests spread more all over the Punjab and the Sikhs are demanding arrest of the culprits who are behind the incidents of sacrilege of Guru Granth Sahib. Due to the pressure of public on the govt, the Punjab police had claimed that they have arrested Rupinder Singh and Jaswinder Singh, two real brothers who were accused of committed the sacrilege  and so the police claimed to have solved one of the sacrilege incident.

The police also claimed in a press conference which was held  by Mr. IPS Sahota Additional Director General of Police that there is a foreign hand in the incidents and some people in foreign countries such as Australia and Dubai are behind these incidents. Though within two three days of Punjab police’s claim of foreign hand, their claims fell flat on the face, when two persons whose phone Numbers the police claimed to tapped came out in social media and claimed innocence and also admitted to have sent a paltry sum of below 20,000 Rs, which was for medical aid to one of the accused Rupinder Singh who was undergoing treatment at Apolo Hospital for spinal injury received by him due to stick blows of the police.

Thereafter they also appeared in some TV Channels falsifying the story of the police. To this effect several prominent news papers wrote their stories in big columns. One such story also appeared in Times of India Newspaper dated 22.10.2015 under the heading “FORIEGN HAND REVEAL THEIR TRUE IDENTITY”.

The people of their village and surrounding villages also stood against the false implication and arrests of Rupinder Singh and Jaswinder Singh. In their Village i.e. Panjgrain Khurd the entire village stood in favour of the youths. They claimed that the brothers were falsely implicated by the Punjab police and questions are being raised over the police probe. Interestingly on e of the youth Rupinder Singh who is a Baptised Sikh and was injured in the police lathi had suffered injuries on his spinal cord and he was got admitted in Apolo Hospital by the people from where he was arrested.

After the arrest of the brothers Rupinder Singh and Jaswinder Singh, the police produced them before the concerned Magistrate on 21.10.2015 and they were remanded to police custody by the Magistrate for six days. On 26.102015 they were sent to judicial remand. On 27.10.2015 Rupinder Singh was referred to Advance Trauma Centre in P.G.I., Chandigarh for treatment of his spinal injury.

After reading the news items in the Newspapers regarding the arrests of Rupinder Singh and Jaswinder Singh and protests by the Villagers and Sikh Leaders levelling serious allegations on the Punjab Police for falsely implicating, LFHRI with help of Mr Phoolka, Sr Advocate of Delhi identified Mr. Shiv Kartar Singh Sekhon a lawyer from faridkot to defend the brothers and also assured the family of all legal help in the High Court at Chandigarh as well as Supreme Court of India, Delhi in case of need.

Our team was informed about  Rupinder Singh being shifted to PGI, Chandigarh to Advance Trauma Centre, P.G.I., Chandigarh due to his spinal injury so Lawyers For Human Rights International  formed a fact finding team comprising of Navkiran Singh, Tejinder Singh Sudan, Parminder Singh and Navratan Singh advocates and in the evening of 28.10.2015 the team members went to Advance Trauma Centre,  P.G.I. and verified about the injured Rupinder Singh and after searching for him found his father Mr Darshan Singh, who told the members that Rupinder Singh has been taken for MRI by the Punjab Policemen.

While we were waiting for Rupinder Singh to return back his father disclosed to us that on 14.10.2015 his son Rupinder Singh was injured in a lathi charge by Punjab police, which he came to know about the same on 15.10.2015. He further disclosed that after getting X-ray from outside, his son Rupinder Singh was got admitted in Faridkot Hospital where under the pressure of the police they gave in writing that they do not want to pursue the case due to fear of police and did not want to allege anything against the police and so on 15.10.2015 and they got released Rupinder Singh from the Govt Hospital and took him to home and thereafter at some other place. On the night of 16/17.10.2015 the police arrested him and his other son Jaswinder Singh along with  Gurlal Singh, Aman Singh, Mauji shopkeeper and they all were taken to C.I.A. Staff at Mehna Road. Over there he and Mauji were separated and the remaining were taken to another room. Gurlal Singh was mercilessly tortured in the next room as he heard his shrieks.

The father further disclosed that he spent a night over there behind the bars  and was released alongwith Mauji,  but Jaswinder Singh, Gurlal Singh and Aman were taken away by the police. He also came to know that his son Rupinder Singh was also taken into custody from Apolo Hospital, where he was admitted by Bhai Kanhaiya Sewa Society Members. Thereafter he along with his Village Sarpanch Baldev Singh met his other son Jaswinder Singh at C.I.A. Staff, Faridkot  on 18/19.10.2015 and found him badly tortured by the police and he was barely able to walk. Gurlal Singh was later released by the police from C.I.A. Staff, Faridkot. He also reported that he saw some torture scars on the feet and ears of Jaswinder Singh.

On this the team member Navkiran Singh talked to S.S.P., Faridkot on his mobile number 9814045052 and the S.S.P. told Navkiran Singh that there was no such instructions from the police and it was only jail authorities who can allow us to meet him. On this Navkiran Singh, Advocate took the cell number of the Supdt of jail Faridkot from the present jail staff and talked to Jail Suptd. Mr. Balkar Singh Bhullar and requested that he should be allowed meeting with the detenu Rupinder Singh, who sought time to talk to his seniors and then called Navkiran Singh Advocate back, but refused the permission to meet Rupinder Singh.

It is apparent that the police and jail authorities have joined hands with each other to conceal the truth about Rupinder Singh’s human rights violations in custody and that is the reason that his Lawyers are not being permitted to talk to him in person.

We demand a detailed enquiry into the whole episode of the implication and Torture of Rupinder Singh and Jaswinder Singh and others in case FIR NO 128 Dated 12-10-2015, P.S Bajakhana, District Faridkot.