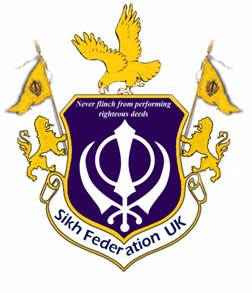 LONDON, (UK) – The Sikh Federation (UK) publicly castigated the British authorities for the police action that was taken against the families of Sikh activists last week. Police authorities carried out multiple searches of five properties in Birmingham, Coventry and West London.

The following statement was issued by the Sikh Federation :

All the activists are known to be linked to the campaign to secure the release of 31-year old Jagtar Singh Johal from Dumbarton who has been in an Indian jail for over 300 days.

Jagtar has been tortured, denied unfettered British consular access and prevented from receiving an independent medical examination. He has also faced the torment of trial by media with Indian police releasing so-called confessional video tapes after he was tortured and threatened to be burnt alive during interrogation. Such information is inadmissible in court under any circumstances.

The raids by around 70 police officers lasting 12-36 hours not only targeted Sikh activists, but their elderly and disabled parents and young children who have been left traumatised and suffering from nightmares. In one of the raids a bomb disposal unit was bizarrely deployed to deal with a few household fireworks.

The police raids themselves have cost the taxpayer tens of thousands of pounds that would have been better deployed targeting those hell-bent on committing acts of terror in the UK. Instead these raids appear not to have been based on evidence based intelligence, but have been carried out to demonstrate to the Indian authorities the UK is willing to help take actions against Sikh activists.

The police raids are seen by many in the community as a fundamental attack on the civil liberties of members of the law abiding Sikh community who generally provide an excellent example of successful integration whilst maintaining a very visible and distinctive identity.

No one has been arrested following the raids on Tuesday, but those who have had their homes raided have had phones, laptops, electronic equipment and other valuables removed. There are genuine fears British police will breach data protection laws under political pressure to assist and appease the Indian authorities and put the lives of innocent and vulnerable Sikhs under further threat.

Underlining the suspicion that Indian police officers accompanied British police during the raids Sikh activists being investigated have mentioned ‘Indian’ officers being present during the raids who refused to provide identifications and spoke poor English.

The West Midlands police were immediately challenged on the day of the raids by none other than leading solicitor Gareth Peirce who was contacted as soon as the Sikh Federation (UK) learnt of the raids.

Gareth Peirce is one of the best human rights lawyers in the country who has represented the Guildford Four and the Birmingham Six; the family of Jean Charles de Menezes; and Moazzam Begg who was detained in Guantanamo Bay.”

She has challenged the legality of many of the seizures of individual items. A far wider challenge questioning the justification for and conduct of the raids as a whole is now being pursued by her as a matter of urgency on behalf of the Sikh activists.

The West Midlands Counter Terrorism Unit (WMCTU) admitted the Indian connection in its initial press release, but have to date declined to disclose those being targeted were Sikh activists fearing a community backlash.

Preet Kaur Gill MP, the Chair of the All Party Parliamentary Group for British Sikhs, met the head of the WMCTU yesterday, listened to the logic of their actions, but posed a number of challenges.

Many commenting on the police raids have mentioned the past British history of military and other assistance to the Indian authorities to target and kill innocent Sikhs in their homeland in the 1980s and subsequent anti-Sikh measures in the UK.

In another inadvertent admission of the British police doing the dirty work of Indian police the search warrants astonishingly refer to ‘any clothing’ supporting organisations banned in India even though these organisations can and do operate legally in the UK.

Sajid Javid, the Home Secretary who is believed to have sanctioned the raids will be embarrassed as it has now also been reported in the Indian press that senior Indian police officers have provided names to Indian journalists of the Sikh activists that have had their homes raided in Britain while the British police remain silent.

Jagtar has made over 50 court appearances, but no witnesses or evidence has yet been presented in court to substantiate the limited charges that were eventually made public six months after his abduction and torture. There are only 15 lines in the 1,000+ page charge sheet relating to Jagtar and these simply repeat what he said in the confessional video that is inadmissible in court.

It appears the Indian authorities have turned to the British police to find any evidence that may help against Jagtar Singh Johal judging by the wording of the entry and search warrants that were issued by Birmingham magistrates.

“As soon as we learnt of the raids we immediately involved Gareth Peirce who is challenging the legality and justification of the police actions.”

“We know the police officers used heavy handed techniques, have made several fundamental mistakes that lawyers have picked up on and action will be taken against police officers, especially the way they treated the families involved.”

“Following comments of Punjab police officers the Sikh community and lawyers are in no doubt these raids are linked to a search for evidence against Jagtar Singh Johal.”

Thaminder Anand’s Saroops from China – Latest in a Pattern of Violations Being Ignored...