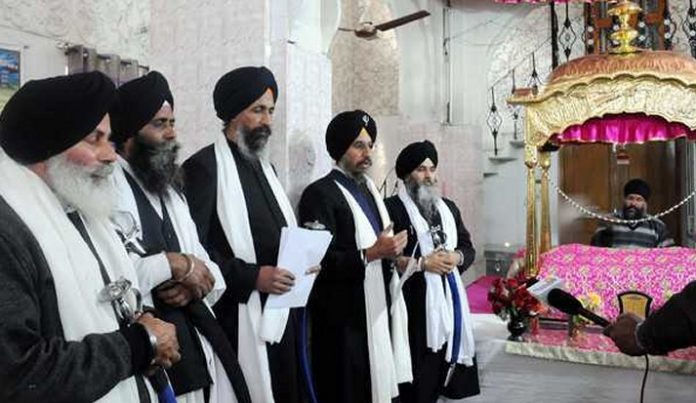 AMRITSAR SAHIB (SNN) – Sikh organizations welcomed the decision of the Five Pyaras for the social boycott of the Takht Jathedars along with Shiromani Gurdwara Parbandhak Committee executives, Avtar Makkar and Harcharan Singh.

Various Sikh organizations in Punjab and abroad welcomed the call for the boycott, and expressed solidarity with the Five Pyaras” actions.

The five Singhs who officiated the Amrit Sanchars at Sri Akal Takht Sahib, requested the Sikh Nation for a full social boycott of State sponsored Jathedars of the Takhts for their roles in “pardoning” the Dera Sacha Cultist Gurmeet Ram Rahim, and issued a boycott against SGPC president Avtar Makkar and secretary Harcharan Singh for not taking action against the Jathedars.

Interestingly, before the deadline ensued, the SGPC executive fired four of the five Singhs and declared the fifth as retired from his post.  After thier dismissal, the five Singhs were not allowed to enter Sri Akal Takht Sahib complex, which was surrounded by a large contingent of police officials in civil uniforms.

The Five Pyaras issued the call for the boycott from Gurdwara Angittha Sahib nearby Gurdwara Ramsar Sahib, the memorial site where 13 Singhs who were massacred on Vaisakhi 1978 were cremated.

The call for the boycott stated that the Takht Jathedars were guilty of denigrating Panthic norms and traditions and therefore their authority as Jathedars should not be recognized and they should be socially shunned by the Sikh community.

The stern action against Gurbachan Singh and others was welcomed by Akali Dal Amritsar, headed by Simranjit Singh Mann, Dal Khalsa, and various European, and North American Sikh organizations.

On a side note, the Five Pyaras gave no hint that they have recognized the installation of any new Jathedars that were announced by the November 10th 2015 Sikh conclave at Chabba, Amritsar that is being dubbed as a “Sarbat Khalsa” by its organizers.

In November of 2015, Satnam Singh Khanda and the other four Pyaras had requested the Chabba organizers to refer to the conclave as a “Sikh convention” and not declare it as a “Sarbat Khalsa.”

The organizers at that time ignored the wishes of the Five Pyaras and went ahead with the conclave under the designation of “Sarbat Khalsa.”  and announced the replacement “Jathedars” as Bhai Jagtar Singh Hawara, Baljeet Singh Daduwal,  Amrik Singh Ajnala and Dhian Singh Mand.