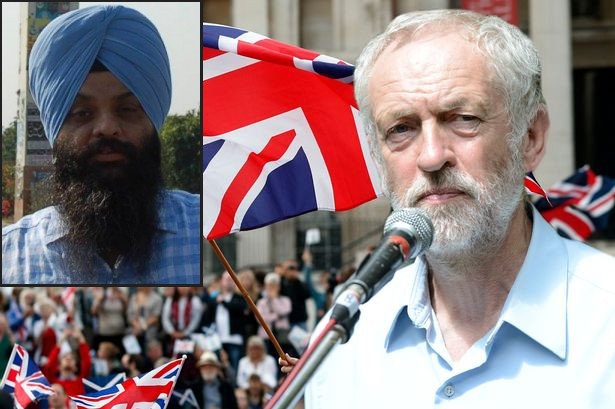 LONDON, UK – British Labour leader Jeremy Corbyn has cut through the red tape to appeal directly to Portuguese prime minister Ant¢nio Costa over the case of an Indian father-of-four held in jail in Braga as a result of what many claim is a bogus Interpol extradition warrant.

Only days ago, British foreign secretary Philip Hammond told the House of Commons that the UK was effectively powerless to intervene in the case.

?Ultimately, it is the Portuguese authorities that have jurisdiction in Mr Singh?s case and will decide whether or not to extradite him to India,, he said.

But the tireless efforts of campaigners have managed to pull this ?rabbit out of a hat? in the last few days before vora appeal court judges are due to make a decision.

Jeremy Corbyn has written directly to Costa, saying he would be ?very grateful? if the Portuguese PM would ?look into the matter? personally – and he stresses he would ?even be willing to talk on the telephone about this if it would help?.

As the Resident has been explaining since the 42-year-old delivery driver from Birmingham (full name Paramjeet Singh Saini) was arrested by police after checking into an Albufeira hotel on December 19, the terror charges stacked up against him refer to incidents that happened years after the Sikh human rights activist fled his native country for good – and have already been investigated and found insufficient to elaborate any kind of case against him.

Jeremy Corbyn?s letter begins with a friendly ?Dear Antonio?, written by hand, and continues in typeface:

?I am primarily writing with regards to the case of Mr Paramjeet Singh Saini. Mr Saini is an Indian citizen who arrived in the United Kingdom in December 1999 and was granted asylum by the British government in September 2000 due to well-founded fears of maltreatment by the Indian authorities. These fears were compounded by allegations of Mr Saini?s brother being tortured and killed whilst in gaol in India.

?Significantly, the case raises serious concerns about the rights of those who have been granted asylum and the extent to which they are able to travel within the European Union. It is within this context that I write to you to highlight the legal procedures taken against Mr Saini.? – Jeremy Corbyn

?Mr Saini has therefore lived in the United Kingdom for over 16 years with his wife and four young children who are British citizens. On 18th December 2015, using travel document number C003655438, Mr Saini travelled to Portugal for a family holiday. However, whilst there he was arrested in Albufeira after Interpol issued a Red Notice for extradition against him.

?This has resulted in a scenario whereby India is applying to the Portuguese courts for Mr Saini?s extradition, instead of the British courts who have jurisdiction over where Mr Saini is a permanent resident and holder of refugee status.

This situation has caused a lot of concern to me and many others across the British parliament. It has also become a major issue within the very large Sikh community who live in the UK. It is difficult to attain indefinite leave to remain in the UK and it would not have been granted to Mr Saini unless there were genuine and serious concerns about how Mr Saini may be treated by the authorities, if he were to return to India.?

With multiple criticisms already voiced over what any decision to extradite could mean to political refugees and asylum seekers in general, Jeremy Corbyn concluded his appeal, saying:

?Significantly, the case raises serious concerns about the rights of those who have been granted asylum and the extent to which they are able to travel within the European Union. It is within this context that I write to you to highlight the legal procedures taken against Mr Saini.?

The Labour leader?s appeal is certain to hit home with Costa, as he is not only of Indian extraction himself – and therefore very much aware of the history of Sikh persecution in India – but he is also a lawyer by profession, and thus able to appreciate the legal implications of intervention by Portugal.

Thus, the Sikh community powering this relentless campaign to ?get Paramjeet home? waits to see what will happen next.

Meantime, daily Twitter campaigning remains in place, with the case already having received television and radio exposure throughout the UK.