Boisterous Protest by Sikhs in Central London Overflows into the Streets 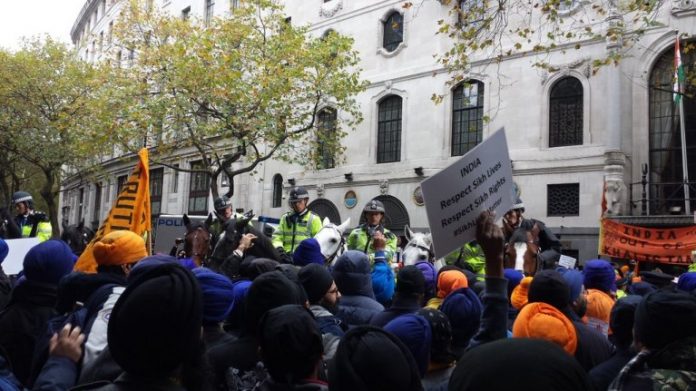 LONDON, UK (SSN) – Hundreds of Sikhs gathered under the ‘Sikh Lives Matter’ for a boisterous protest in central London outside the Indian High Commission against the ongoing police brutality and the desecration of Sri Guru Granth Sahib Ji that has occurred in Punjab.  Several Sikhs were arrested and detained by the London police during the demonstration when the crowd overflowed into the busy streets.

“The point of the protest today was to raise awareness and show the Indian authorities that Sikhs of the UK stand in solidarity with the community in the Punjab who are suffering at the hands of Indian authorities, stated Jasveer Singh Gill, a spokesperson of the Sikh Press Association (SPA).

According to SPA, police became very aggressive towards the demonstrators who overflowed into the main roads and were “pushing back protestors”  and even snapped some of the Sikh Nishan sahibs from the protestors.  The organizers of the protest re-iterated they were there for a peaceful protest where the opportunity can be taken to educate the wider public about the social media campaign ‪#‎SikhLivesMatter‬.

They noted that in June there was a peaceful sit-down protest organized by the Sikhs and although roads were blocked outside parliament, no altercations took place. The SPA stated that the even though the police had advance notice they failed to adequately prepare barriers and road cordons, so the large crowd had not alternative but to flow into the roads.

The SPA noted that the Indian government and Punjab Police have killed two Sikhs and brutalized many in Punjab who were peacefully marching against the lack of action by the police towards finding the culprits responsible for desecration of the Sikh Scriptural Guru, Sri Guru Granth Sahib ji.

They group further added that “the Sikh community strongly suspects that these desecrations are politically motivated and the Punjab Government is deliberately not investigating these desecrations. Just yesterday the police have wrongfully arrested two Sikh brothers who were part of the protests for the crimes of desecration of Sikh scriptures. We feel this is symptomatic of a desire to keep the Sikhs suppressed and confused about who is behind these events.”