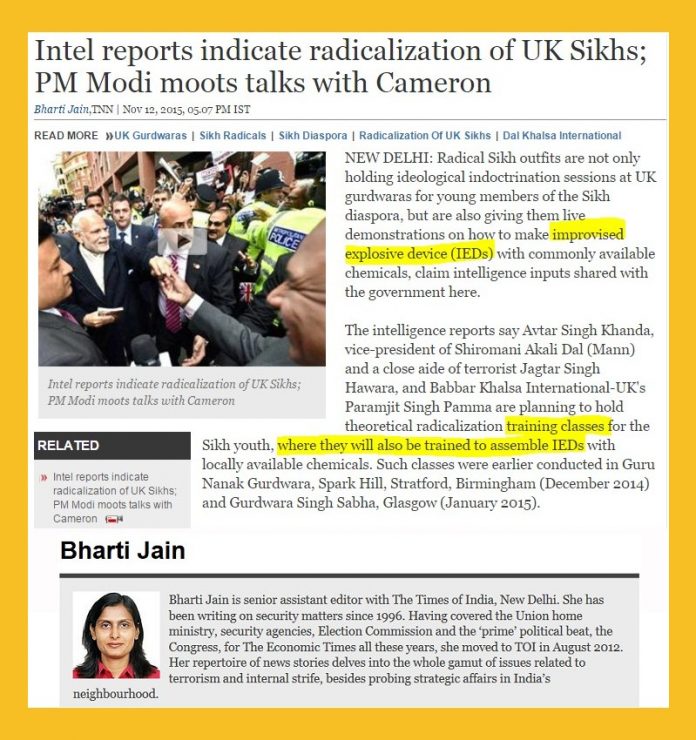 LONDON, UK (SNN) In a desperate attempt to malign the Sikh community in the UK, the Times of India has made shocking and sinister allegations claiming “radical Sikh outfits” in the United Kingdom are conducting training on the building of improvised explosive devices (IEDs) across various Gurdwara Sahib in England.

The deceptive article written by one of their “senior editors”, Bharti Jain also claims that Sikh children are receiving ” ideological indoctrination sessions” along with the IED training.

The article also makes allegations of radicalism against the Sikh Federation UK, the Sikh Channel, Sangat TV. According to article the two popular Sikh TV channels “had tried to incite young Sikhs by repeatedly covering an incident in Jammu dated June 4 that saw one Sikh youth killed in police firing.”

These accusations are being brought up by the Indian media a midst Indian Prime Minister Narendra Modi’s first UK visit – which is vehemently being opposed by the Sikh community and other Indian minorities.

Sikh organizations, which are used to this type of biased and groundless reports by the Indian media, have condemned these absurd and preposterous allegations by the Times of India and the Indian TV channels that are sensationalizing these baseless allegations.